The Beatles are regarded as one of the most influential bands 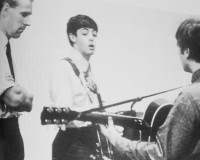 of all time. They changed music. Four of their albums are in the top 10 of Rolling Stone’s list of the top 500 albums of all time. Though they are now at the top of music royalty, they didn’t get there with their talent alone.
George Martin was a classical musician working for EMI. After the Beatles had been turned down Decca records (and reportedly, other major British labels) Martin agreed to meet with the Beatles’ manager, Brian Epstein and listen to the band’s demo. Martin wasn’t impressed but liked the sound of the vocals. Later, after hearing the band play live, he was still unimpressed but liked their senses of humor. He agreed to work with them, making slight changes to their songs, changing arrangements and tempos, and was the producer of nearly all the Beatles’ recordings. Though Martin himself downplays his importance in the Beatles’ success, it’s quite possible that without his guidance and talent, they might have been forgotten to history.