A cadence is the bit of music that marks the end of a phrase, harmonically, rhythmically, or a combination of both. In this post we’ll look at the chords in the five basic harmonic cadences. These are Perfect, Imperfect, Plagal, Deceptive and Half Cadences.

Note: Remember that anything can function as a cadence – these are by no means the only cadences! They are simply the ones that have, for hundreds of years, been burned into the collective consciousness of western music. They’re the five that are the most recognizable, and when we hear them, they sound inevitable!

I’ll use the roman numerals for the chords and translate that to G major. At the end I’ll give you the examples in e minor. If you want to look at them in all keys, use this pdf!

This one is called the Amen Cadence by most choir singers. A lot of Christian music ends with this one. IV – I. In G it’s C – G. Usually, the rest of the music is similar to any other western music but at the very end we hear a big amen sung in the C and G. Try G – em – C – D – G – em – C – G. The last two chords are your amen!

This one is close to the Perfect except it ends on the relative minor. It looks like V – vi… That’s it. In G it’s D – em.

Again… This one is a lot like the perfect cadence, but it ends before we ever hear the I chord. Usually ending on V. An example is I – IV – ii – V. In G it’s G – C – am – D. Our western ears have been trained to hear a G following this. If you decide to end on the D and snub the 2nd part we expect to hear, that’s a half cadence.

Here are the examples in e minor. The important chords are in bold. Notice that I use a B instead of bm. To build the V chord (in e minor, that’s the b) I’m using the harmonic minor scale. 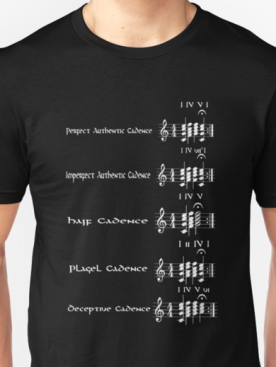 Yes… I end on an E major so I can hear the a note descend to the g#. Ending on the major while in a minor key is also called a picardy cadence.

Like I mentioned above, this isn’t the end of cadences. For example, if you run a cycle of  G – D – bm – G – D – bm – etc, we begin to expect the G to follow the bm making that a cadence. Use the above list as a guide in your own writing but definitely also use your ear. If it sounds good to you, use it!

If you want to show the world that you’re a music geek and proud of it, buy the cadence shirt from my redbubble store here!